I’ve loved aviation for about as long as I’ve been alive.  I remember seeing my first airplane when I was about 4 years old – actually it was the tail of an airplane.  I remember asking my dad what that “thing” was as it peaked from above the jet blast barriers at the airport.  As he began to tell me what it was my brain could not picture what he was talking about.  All I was able to understand was that people went up in the air in this thing.  Dad saw the perplexed look on my face so he proceeded to take me to the top floor of the airport parking lot and as they say “the rest is history”.

Fast forward 32 years from that day, and I still feel like a little kid when I go spotting (photographing airplanes).  Even though I am now an adult capable of abstract thought and I am well versed in the physics and engineering that make flight possible, it is still seemingly incomprehensible to see such a large and HEAVY thing lift seamlessly into the air.  Icarus would be in awe.

My favorite airplanes to photograph are commonly referred to as ‘heavies’ in aviation jargon.  I won’t go into the technical aspects of what qualifies them as heavies, all you have to know is these are the biggest airplanes capable of flight today.  I also enjoy shooting other airplanes that have fun liveries (paint jobs) or that are rare altogether. 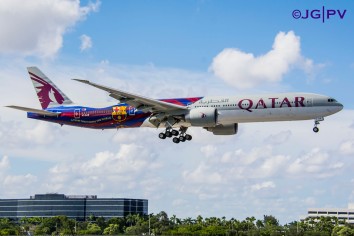 For decades the Boeing 747 held the title of ‘World’s Biggest Airplane’.  The creation of a man named Joe Sutter, it changed the world as we know it, literally.  This is by far my favorite airplane, a thing so massive capable of carrying a Lamborghini in its cargo hold while at the same time carrying hundreds of passengers across the world.  It is as elegant as it is useful and it is impossible to imagine a world without it.

In recent years however, the 747 has been eclipsed in size by the likes of the Airbus A380 and the Antonov 225 Myria, which I hope to be able to photograph in the near future (look for an update).

The A380 is no doubt a beautiful airplane.  Many people don’t like it because it doesn’t have the elegance that the 747 has, but it is nevertheless a joy to photograph and to see it land and take off whenever I have the chance.  I have yet to fly in one of these whales as they are affectionately called, but I hope to do so very soon.

Even if you are “not into planes” I hope that you’ve enjoyed a little bit of this pictorial.  And, as you’re buckling your seat belt before takeoff on your next flight, remember that what you are about to experience is nothing short of a miracle.